As China Evolves, the Artist Cao Fei Is Watching

Fresh off the plane from Art Basel Hong Kong this week, the Chinese artist Cao Fei was stationed at MoMA PS1, ready to supervise the installation of her first United States museum retrospective. At 37, she seemed too young to warrant an extensive survey. Dressed in a black hoodie and fashionable striped pants, Ms. Cao could have been one of the characters in her early videos, teenagers influenced by hip-hop culture or 20-somethings costumed as Japanese manga characters.

But the artist — often described by the art world as the embodiment of the new China — has been on the scene internationally for nearly 20 years, with featured spots at the Tate Modern in London and the Venice Biennale. She has managed to encapsulate her country’s societal shifts through multimedia works, photographs, films and sculptures. And a stroll through the exhibition, which opens on Saturday, is both a tour and a critique of contemporary China, its rapid urbanization and the impact globalization has had on it.

“Cao Fei visualizes the tension that a person of her age has to face in China on a daily level,” said Klaus Biesenbach, director of MoMA PS1, who has worked with her throughout her career and who organized the exhibition, “Cao Fei,” which runs through Aug. 31. “It is important for a New York audience to find out that you can find someone as cutting-edge in Beijing as you can here.”

The story of Ms. Cao contrasts two generations of Chinese artists. Her father, Cao Chong’en, was an accomplished realist sculptor whose statues of leaders from Mao to Deng Xiaoping appear throughout China. Coming from a landowner family that suffered greatly after the 1949 revolution, he learned to do what he was told and make whatever the Communist Party required.

Cao Fei (pronounced TSOW fay) rebelled against that kind of art. She was born in 1978 in Guangzhou, a port city northwest of Hong Kong on the Pearl River and the manufacturing center of China. It opened to Western investors far earlier than cities in the north of the country. And she grew up absorbing the various influences that flooded her hometown and focused on creating art that examined China’s economic boom. She gained attention early from prominent European curators before being seen at home, thus bypassing some of the obstacles usually encountered by female artists in China.

“She was really fresh and really young, but you could feel her potential to be an incredibly unique artist in that she approached the youth culture in a very contemporary way,” said Hou Hanru, artistic director of Maxxi, National Museum of the 21st Century Arts, in Rome, who met Ms. Cao when she was still a 21-year-old student at the Guangzhou Art Academy. Struck by her ability to both reflect and interpret a China in flux, he requested her first video, “Imbalance 257,” for an exhibition in Spain.

Named for part of her address while living in the dormitory in Guangzhou, “Imbalance 257” (1999) loosely tells the story of a group of Chinese students confused about what the future holds after art school. It is a combination of documentary and drama, interspersed with Communist revolutionary graphics and Japanese animation.

“When I got the phone call from him, asking for my C.V., I was so excited,” Ms. Cao recalled, speaking English with the help of an interpreter, this week at the museum. “It was the first time I received an international call. I had no Internet, I had no email, I did not speak English and I didn’t have a résumé. I had to ask my classmates for help with translation.”

Some curators were surprised to find an accomplished work from such a young artist. But her father had used video to document his works and passed on his used cameras to his two daughters, who amused themselves by making home movies. By the time the soon-to-be artist was 14, her older sister, Cao Dan, now the executive publisher of Leap Magazine and the Art Newspaper’s Chinese edition, was working in advertising and often hired her younger sister to perform in MTV-like commercials.

“Many people comment on the difference between me and my father, but I’d rather talk about the similarities,” said Ms. Cao, who made a documentary about him, presented at the Moscow Biennial in 2005. If Mr. Cao (who now splits his time between Canada and China) had survived by capturing crucial moments of the Cultural Revolution, Ms. Cao marks turning points for young people.

From 2005 to 2006, she worked on “Whose Utopia?,” a film created at the Osram light bulb factory in Foshan, in the Pearl River Delta, as part of a project run by the Siemens Art Program from 2000 to 2006; the program is part of that global industrial company’s cultural outreach. She found 20 workers to act out their fantasies for her camera in ways that are alternately funny and very sad. 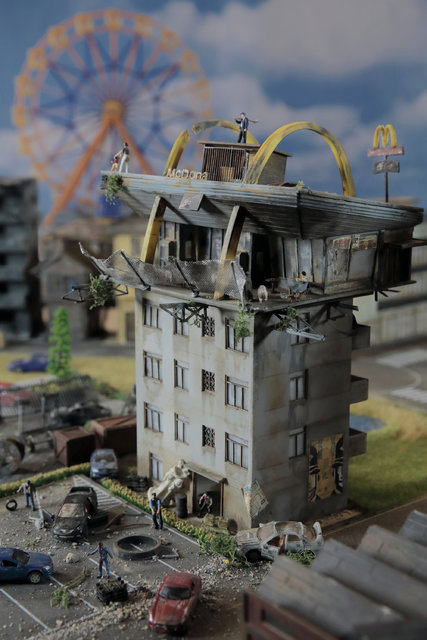 A year later, she entered a true fantasy world via Second Life, an Internet site that lets participants choose avatars and interact with one another. As China Tracy, Ms. Cao spent eight to 10 hours a day on her computer, even developing an ill-fated romance, captured in her film “i.Mirror.” She went on to create her signature work, the virtual “RMB City” (2007), in which the Pearl TV Tower in Shanghai abuts the Forbidden City and statues of Mao. Eventually, the Swiss collector Uli Sigg acquired Ms. Cao’s project, which continues to evolve, and later donated it to the M+ Museum in Hong Kong.

By then, Ms. Cao had already shown in dozens of biennials, succeeding as few female Chinese artists have, by working outside the social network in China, which Mr. Biesenbach described as a “very male-dominated group.”

She moved to Beijing with her husband, the Singaporean artist Lim Tzay Chuen, after their two children, who are now 7 and 4, were born. She also took time off from art-making for child rearing, but returned to work in 2013 with “Haze and Fog,” a zombie apocalypse film set in the vast housing projects of present-day Beijing, with its pollution and crowds. The next year, she created “La Town,” a stop-action film, using miniature figurines and architectural models, that depicts a society on the verge of destruction.

“I do not see the impact of globalization in black-and-white terms,” Ms. Cao said. “I more observe from different angles.” But she is not disengaged from politics or social issues, as is the case with many Chinese artists her age.

She still has not had a museum show in China, though negotiations are underway to bring the MoMA PS1 show there.

“I am quite independent and not really involved in the art circle in Beijing,” Ms. Cao said, adding, “When they introduce me there, they sometimes say, ‘She is the most important female artist in China’ — not artist, female artist.”