A reminder of how  the messaging app is winning the market share at Alipay’s expense by stretching the potential of scanned codes. For a look at how these changes are affecting the art world, see my post on ‘The Art of the QR Code‘

The way Chinese smartphone users pay for lunch and browse the internet owes much to an obsession that the founder of messaging app WeChat has with quick-response, or QR, codes.

The square QR code, which stores data that can be read by the camera on a smartphone, has been used in various ways for years. In many countries, consumers can scan QR codes on vending machines to buy drinks and snacks. Social-networking apps such as Facebook and WhatsApp let users add each other by scanning QR codes.

But probably no one has stretched QR codes’ potential as much as WeChat founder Allen Zhang. Calling the smartphone “the third hand for humans,” Mr. Zhang said in a public speech last month that scanning the codes is an intuitive way for WeChat users to explore the world. He mentioned QR codes 22 times in a 90-minute speech.

Each WeChat account, including those owned by businesses, comes with its own QR code. By pulling up their own QR codes or the code scanner, WeChat users can add contacts, make or receive payments or pull up web links instantly without having to type on a small phone screen. 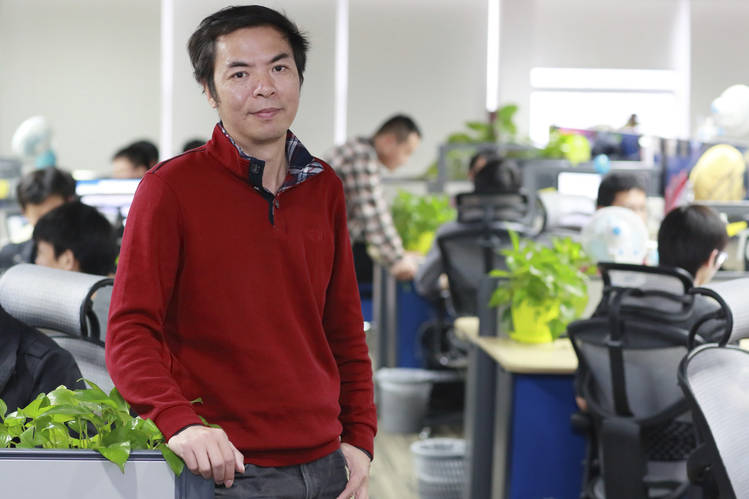 Some four years later, most of WeChat’s 768 million users scan QR codes regularly. Since half of them spend more than 90 minutes a day on the app, the QR code has reshaped China’s mobile internet, especially its crown jewel—payment.

Alipay, the payment service operated by Ant Financial Services Group, an affiliate of Tencent’s rival Alibaba Group Holding Ltd., also includes QR codes in its app but a large percentage of Alipay mobile users have never used them for payment, says a person familiar with the matter. To transfer money, they usually input the recipient’s information, either a phone number or an email account, the person says.

Meanwhile, WeChat, with its ubiquity in Chinese life and its success in getting its users to scan QR codes, is winning market share at Alipay’s expense.

In 2013, the year WeChat Payment was launched, Tencent had only 3.3% of the mobile-payment market share in terms of transaction volume while Alipay had 70%, according to research firm Analysys International. In the third quarter of 2016, while Alipay still had half the market in terms of value, Tencent’s share had risen to 38%, according to Analysys. Tencent also has twice as many mobile-payment users as Alipay.

Tencent declined to comment on the importance of QR codes to its business.

The shift underlines how mobile and cash-light Chinese society has become in the past couple of years. More than 95% of China’s 731 million online population access the internet via their smartphones, and half made offline, in-store mobile payments in 2016, according to a report released by the China Internet Network Information Center, or CNNIC, last weekend.

Many Chinese, especially young urbanites, have let go of wallets in favor of their phones. That has locked WeChat and Alipay in a heated war at offline payment points such as shops, restaurants and department stores that have installed machines that can scan their QR codes. Their signs are often placed next to each other by the cash register. Even taxi drivers let passengers scan to pay.

Alipay has been trying to get users to spend more time on its app by launching social-media features such as Circles. It is hosting an online game that encourages users to scan the Chinese character “happiness” for cash rewards.

An Ant Financial spokeswoman says the company has been working on an application since last September that aims to help merchants and others better serve their customers, but declined to disclose details, including whether it will be accessed via QR code.

For Mr. Zhang, the WeChat founder, QR codes will continue to play a significant role at WeChat, including in “mini programs” that, for example, let a restaurant build a QR code for its menu or a museum embed information about an object into one.

For now, WeChat has launched a campaign for the Lunar New Year that starts this Friday, in which a user creates virtual red envelopes stuffed with cash, a Chinese ritual for wishing good luck. Each red envelope comes with a QR code. The recipients will have to scan the codes to receive the envelopes.