Lin Han and his wife Wanwan Lei have had a fruitful summer. The co-founders of Beijing’s M Woods Museum recently spent nearly a month on an art tour around Europe. Their travels took them from Antwerp in Brussels and Basel in Switzerland to Venice in Italy and Kassel in Germany, but the young collectors are keen to emphasise this was no shopping spree. Rather, it was an intense learning experience.

“When we planned for this trip, we wanted to focus on art. On the road we went to many important and meaningful exhibitions in small towns, meeting a lot of artists and curators. To us it was a research trip. We were there to do our homework. We wanted to experience these artistic events and museums, and take references that could inspire our work,” said Lin. “Our mission was to see and to learn rather than buying art.” 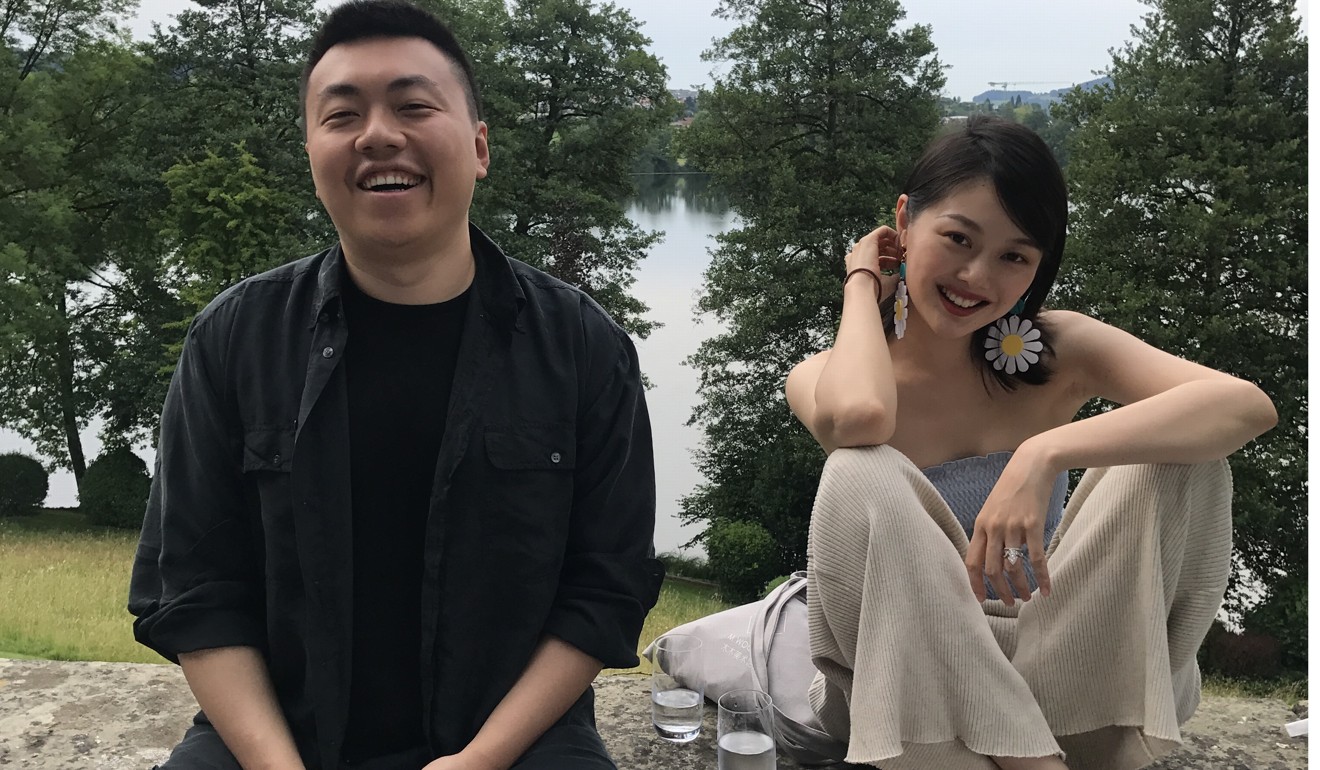 This summer, various important art events in Europe have coincided: the Venice Biennale; Documenta, which takes places in Kassel every five years, and this year has an additional venue in Athens; and Skulptur Projekte Münster (Münster Sculpture Projects), a decennial outdoor exhibition of public sculptures in northeast Germany.

Along with the annual Art Basel in Switzerland and various exhibitions at top museums, it would be hard for any art lover to say no to such a lineup, let alone the new wave of young Chinese connoisseurs-turned-collectors ready to take on the world. 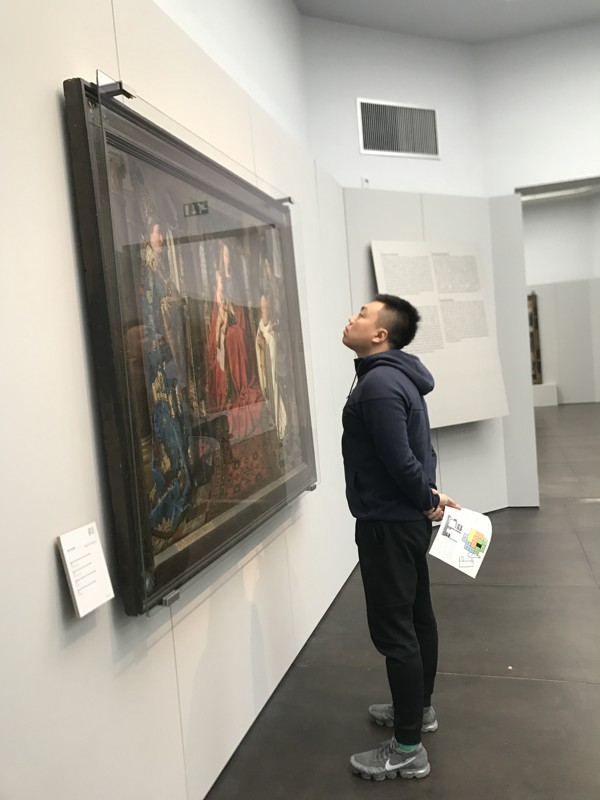 “These are the collectors in their mid to late 20s to 30s who collect internationally. A lot of them have lived abroad. They travel frequently to gather information and are not bounded by just China and Asia. They aim for the world,” said Christoph Noe, an art adviser and co-founder of collectors database Larry’s List.

Compared with mega collectors of the older generation, such as Shanghai billionaire Liu Yiqian, co-founder of Long Museum, and China’s richest man Wang Jianlin, the boss of Dalian Wanda Group, young collectors do not flaunt their wealth by making headlines with their trophy purchases at art auctions. They are not eyeing the top lots on the cover of an auction catalogue either. Their wealth, sophisticated educational background and overseas exposure have reinvented the culture of collecting in China.

“They take collecting very seriously,” Noe said. “They don’t go on a tour bus travelling in groups to check these art events off their list. Young collectors go the extra mile to learn about art, and find artworks that reflect their personality. They read a lot, travelling to galleries and museums asking what’s happening in Berlin.”

Lin and Lei are among the best examples of the young collectors described by Noe. They are both 30 years old and were educated in Britain – Lin studied animation design while Lei read art history. Lin’s first art acquisition was a Zeng Fanzhi painting at a Sotheby’s auction in 2013. They invented the concept of “fat art” to develop their private collection, which honours their eastern cultural roots and embraces their passion for international contemporary art. 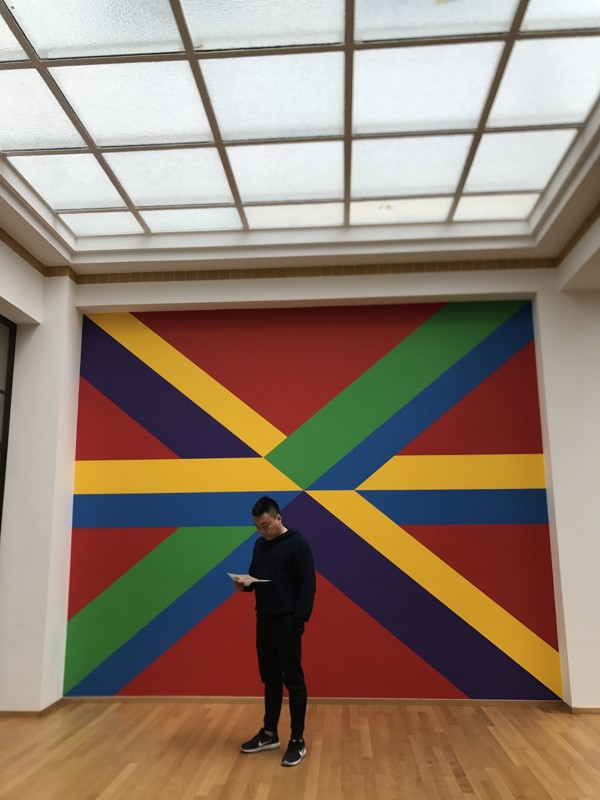 “We want to stress the timelessness of art. Hence in our collection you can find pieces ranging from stone carvings all the way to old master paintings from the 15th and 16th Centuries as well as contemporary art. We are not trying to build an art encyclopaedia, but to show people a common ground among all treasures of human civilisation,” said Lei.

Works by Tracey Emin and younger names such as Charles Harlan feature in the couple’s collection. “One piece particularly important to me is Open Your Eyes by Kader Attia,” Lin said. Attia is a French artist with Algerian roots and Open Your Eyes is a slide show juxtaposing images of wounded soldiers from the first world war with repaired objects. “This work inspires me in so many ways, broadening my horizons and changing my perspective of thinking.”

Their philosophy of art-collecting formed the basis of their Europe itinerary, which was timed around Art Basel in Switzerland in mid-June. Lin and Lei have travelled to the Basel fair – the world’s largest modern and contemporary art fair – for the past four years, but this was their first year attending the Venice Biennale, Documenta and Münster Sculpture Project. They enjoyed the main exhibition in Venice, which features 120 artists from all over the world and was organised by Christine Marcel, this year’s Biennale director and chief curator of contemporary art at the Centre Pompidou in Paris. But the strong focus on politics at the 14th edition of Documenta, which showcases more than 160 artists, wasn’t the couple’s cup of tea. 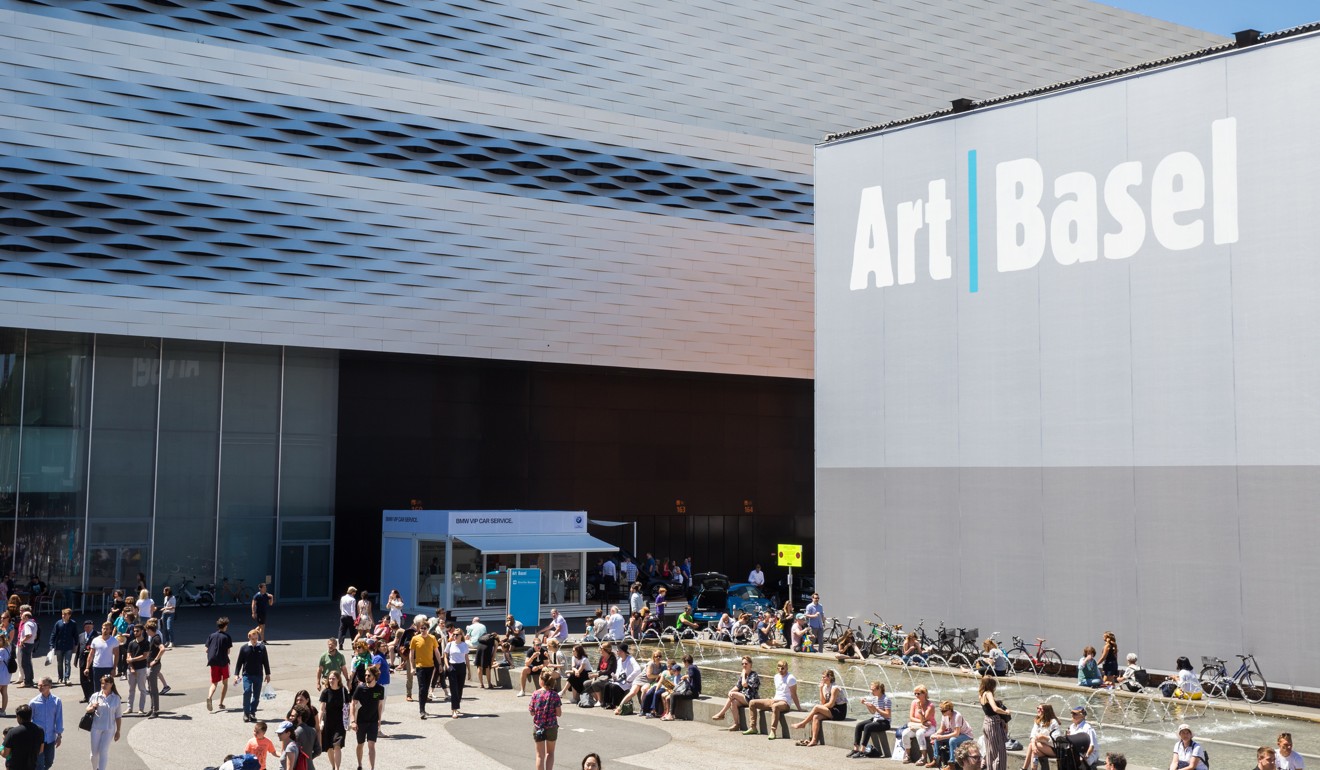 “It wasn’t what we expected. It seemed more like an artistic platform to discuss politics,” Lin said.

Lin and Lei were not the only Chinese collectors doing this European grand art tour. Shenzhen-based Frank Yang, 40, had a similar itinerary. He squeezed visits to Documenta, Venice, Münster and Basel into just two weeks. Like Lin and Lei, Yang founded his own Frank F Yang Art and Education Foundation in 2015, and runs You Space and Extra Space in Shenzhen. The non-profit art spaces run regular exhibitions of not only his private collection but also of works curated by other art professionals.

“It is a way of learning: collection, exhibition and also the proper way of supporting art. Why am I doing this study? Fundamentally it is from the true love of art, but also has a lot to do with my cross-cultural experience,” said Yang, who has studied and worked in both Hong Kong and mainland China. 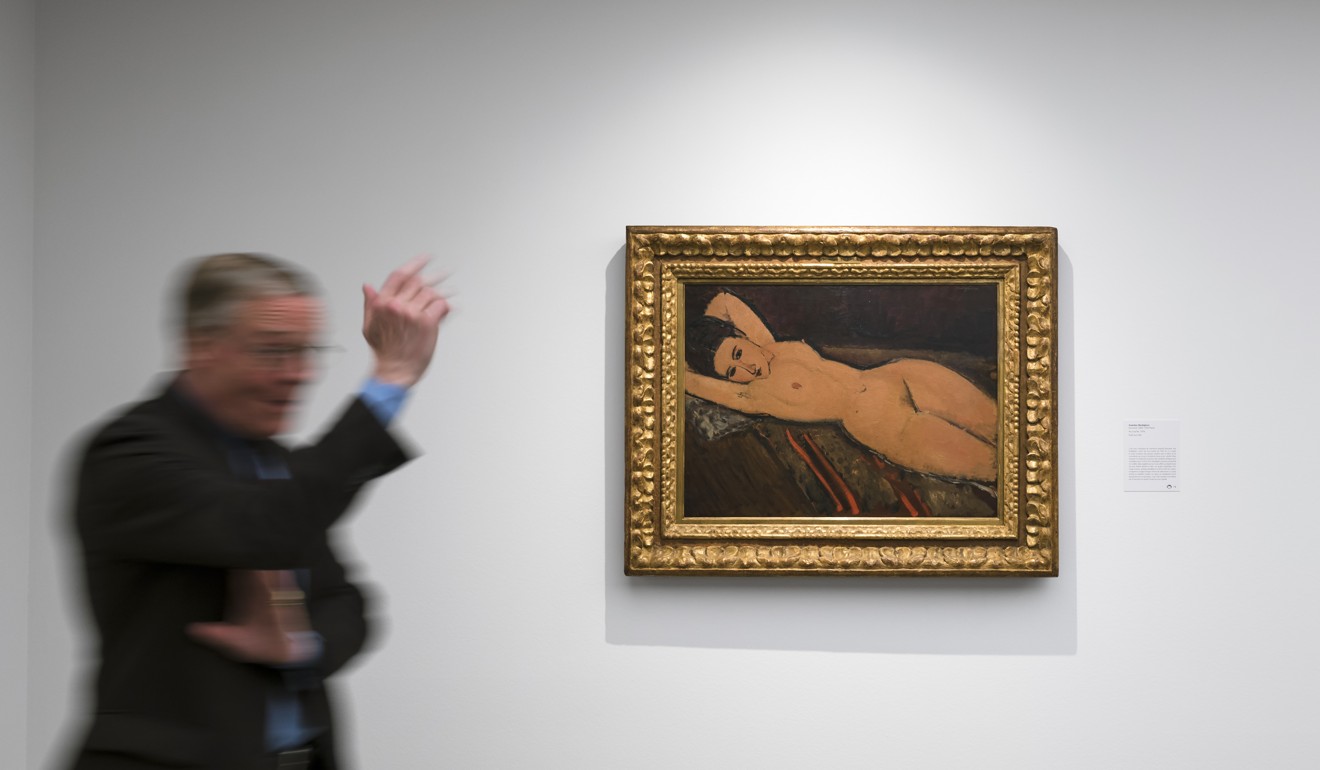 Chinese collectors have come under the spotlight in recent years for highly publicised purchases at auctions, such as the record-breaking US$170.4 million Liu paid for Amedeo Modigliani’s Reclining Nude at Christie’s New York in 2015 and the US$28.2 million Wang paid for Claude et Paloma by Pablo Picasso at another Christie’s sale in 2013. Their astonishing wealth and spending put them among the most important art buyers internationally. According to the recent Art Basel Art Market Report, China is the world’s third largest art market after the United States and Britain, accounting for 20 per cent of total sales. 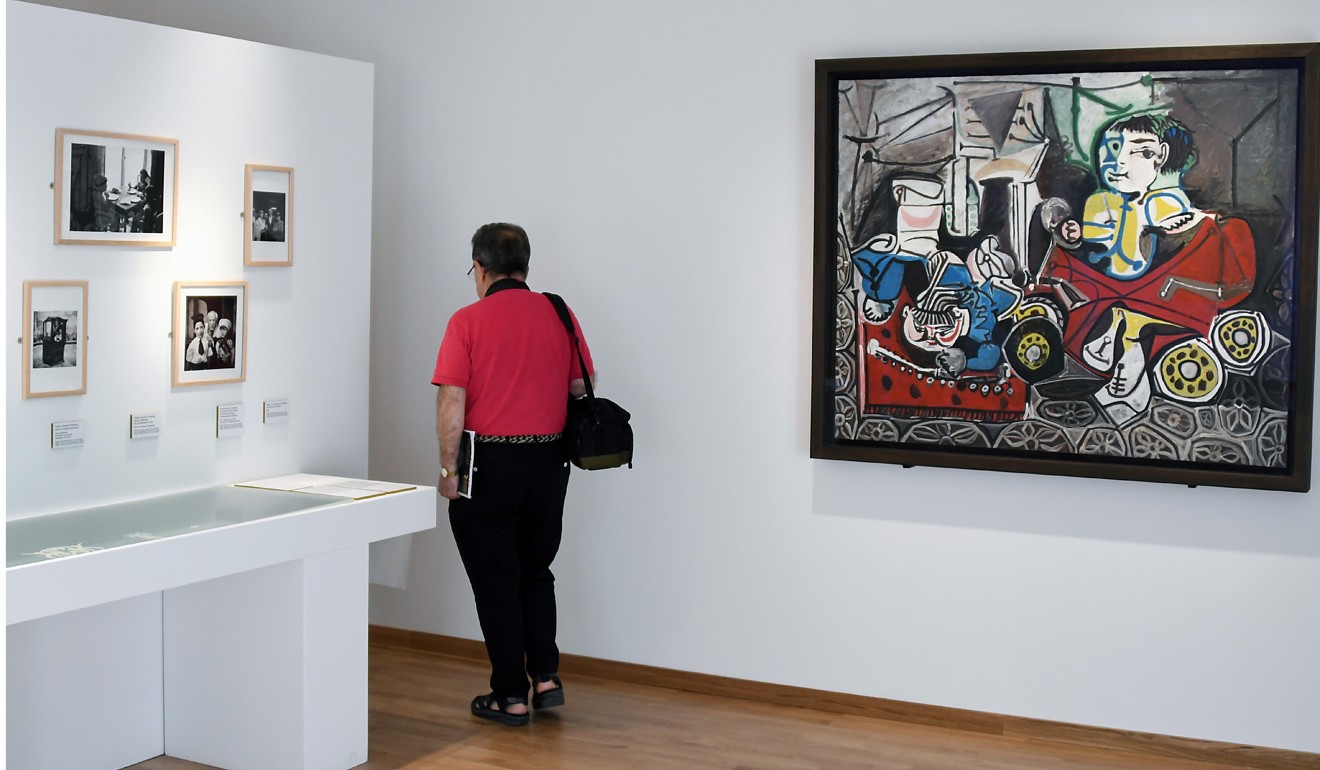 A man looks at pictures next to ‘Claude et Paloma’ by Pablo Picasso. Photo: AFP

Hong Kong-based William Zhao has been collecting art for many years. He began travelling to Art Basel in Switzerland more than a decade ago, and has since witnessed the rise of Chinese collectors in recent years. “There were very few Asian faces,” Zhao recalled. “But just about five years ago, the Chinese collectors began visiting Art Basel. Now it’s a very fashionable event.”

“They begin with going to art auction previews, and then art fairs. Those who are more serious will go to galleries, and then events like Biennales or Documenta. It’s a reversed order. But rather than going to these events, they should go to museums,” Zhao said.

He said that since China had risen to become a global economic power in such a short time, it was natural for people to be ambitious and show the world they were moving forward quickly, even in the art world. 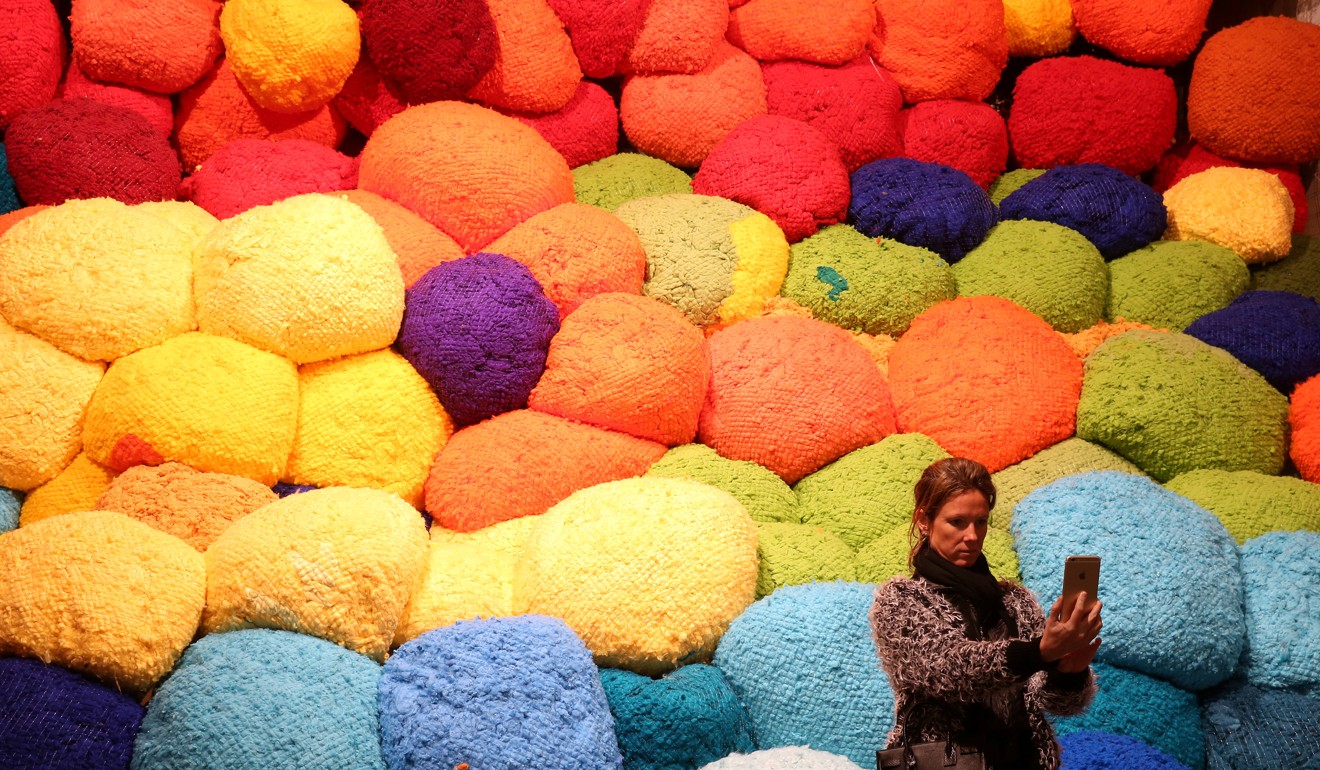 A visitor takes a selfie in front of Escalade Beyond Chromatic Lands at the Venice Biennale. Photo: Reuters

This is even more noticeable among the young collectors. “They aren’t just interested in blue chip artists. They are also looking at emerging and mid-career artists,” said Noe, of Larry’s List. He was once surprised by a young collector from Beijing asking him about artist Alicija Kwade, who is represented by Berlin’s Konig Gallery. “They don’t just listen to consultants and art advisers. They take references from their collectors’ peers. It is a little community,” Noe said.

European galleries are benefiting from the rise of young Chinese collectors. The London and New York-based Michael Werner Gallery sold works by American artist Aaron Curry to this group – some as young as 25 – at Art Basel this June. Wentrup Gallery from Berlin also found young Chinese buyers for works by Gregor Hildebrandt and Peles Empire at the Basel fair. “They did thorough research before making any decisions. They are willing to take risks when it comes to emerging artists,” said Jan Wentrup, founder of Wentrup Gallery.

Contrary to Zhao’s observation, travelling to art fairs was an integral part of the learning experience to collectors, according to Lei. “Art experience is multidimensional, and art fairs are just another dimension because we can meet a lot of art friends there. And Basel isn’t just about the fair. There are other institutions such as Fondation Beyeler and the Kunsthalle Basel that are worth visiting,” she said.

In the name of research, Lin and Lei acquired a work by Wolfgang Laib at Art Basel from Buchmann Galerie on the way. The couple declined to reveal how much they paid for the work, but said their not-for-profit museum M Woods would be staging an exhibition next summer that will feature the artist – who is virtually unknown in China – and juxtapose his works with those of the Shanghai-born conceptual artist Liang Shaoji. “We want to create a dialogue between East and West among them because these two artists have a lot in common,” said Lei.

Luckily for such collectors, the art world has, for now at least, escaped the attention of the Chinese government in its clampdown on capital outflows.

Recent measures by Beijing to stop funds from flowing out of the country have included limiting overseas acquisitions and investments. Recently, the National Development and Reform Commission and the State Council said deals falling under the “restricted” category – such as property, film, entertainment, sports and hotels – were being closely monitored.

However, the scrutiny is yet to spread to art collecting – a situation collectors hope will continue.

Noe said compared with those major overseas mergers by Chinese conglomerates, buying art among individual collectors was relatively insignificant. “It’s not like there are 10,000 collectors. There are so many more people investing in properties overseas,” he said.

And Yang said he wanted to show people art collectors were not speculators. He said the time and passion he devoted to studying, researching and presenting art were about far more than just money.

He said art collectors were responsible for not just the physical condition of the works they acquired, but also for displaying the art works properly to the wider public.

“People who criticise collectors look only at the art market and auctions, not the comprehensive act of collecting. Loving art is much more holistic: you go to museums, galleries and visit artists’ studios. Buying art accounts for only a small portion of collecting.” ■