The independently published ‘pocket-sized works of art’ are undergoing something of a resurgence worldwide. In Hong Kong, with its rich printing history, youngsters have discovered a whole other avenue of expression. 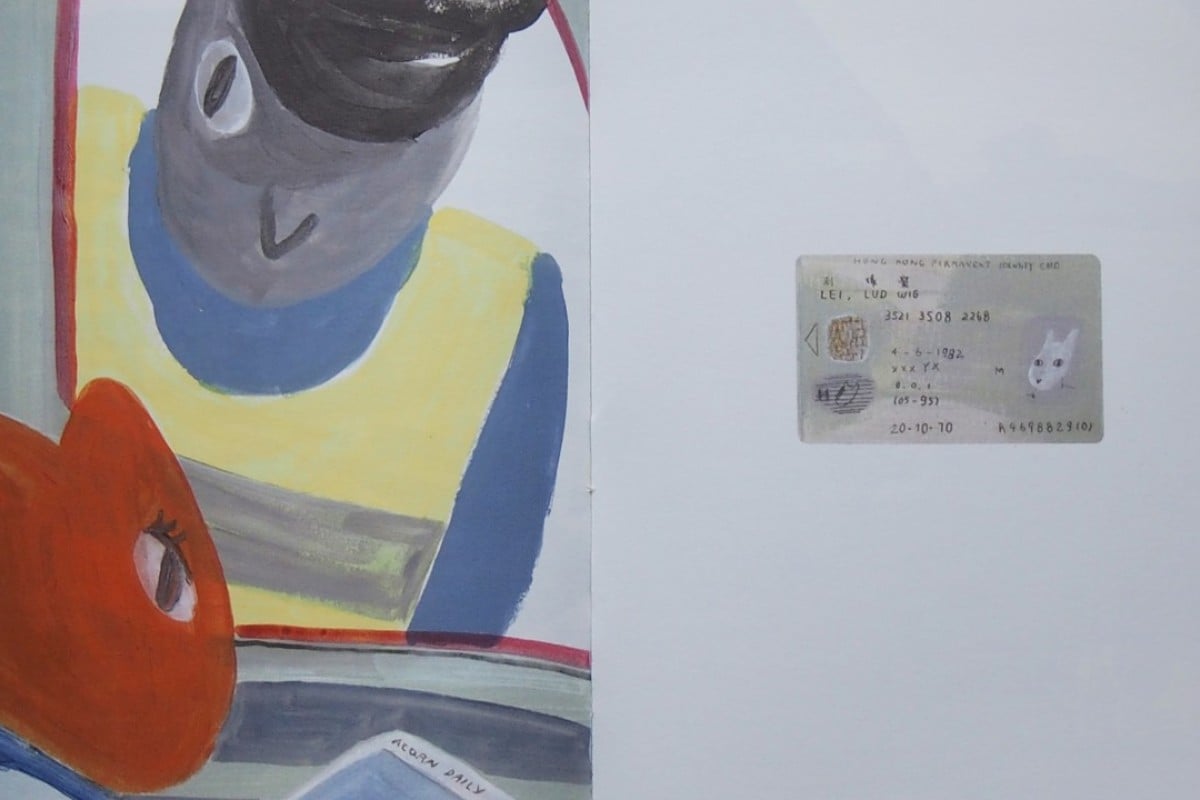 A zine by Yiyu Lam depicting the Occupy Central protests as he saw them unfold on television in Britain.

To the untrained eye, “zines” don’t look like much: pamphlets stapled crudely together, featuring disparate topics and a range of art forms, such as cartoons, illustrations and photography. To collectors, they are pocket-sized works of art, and tools of self-expression.

Zines have been experiencing a resurgence in popularity. Museums, universities and institutions across the United States are championing them, and if any proof of their current popularity were needed, the fact that American rapper Kanye West has produced one – 64 pages of vintage-style photography – should suffice.

Hong Kong, too, with its restive youth, is proving fertile ground.

The word a contraction of “magazines” or “fanzines”, zines were first popularised in the 1920s, by science-fiction fans. From the 1960s to the ’90s, they found favour within punk, feminist, gay and other counterculture scenes. They were typically duplicated using a monochrome photo­copying machine and this low-budget, lo-fi aesthetic became a part of their appeal.

The ’90s wave crashed, with a few iconic titles – such as the feminist Bitch and Bust – morphing into commercial magazines, but a new generation of “zinesters” is being supported by successful festivals such as the L.A. Zine Fest and a burgeoning indie-publishing spirit.

Zines published by Tiny Splendor are typified by an accessible humour. One of the bestselling titles of the popular publisher, which was started by University of California, Santa Cruz printmaking students, is about the numerous ways in which potatoes can be prepared. 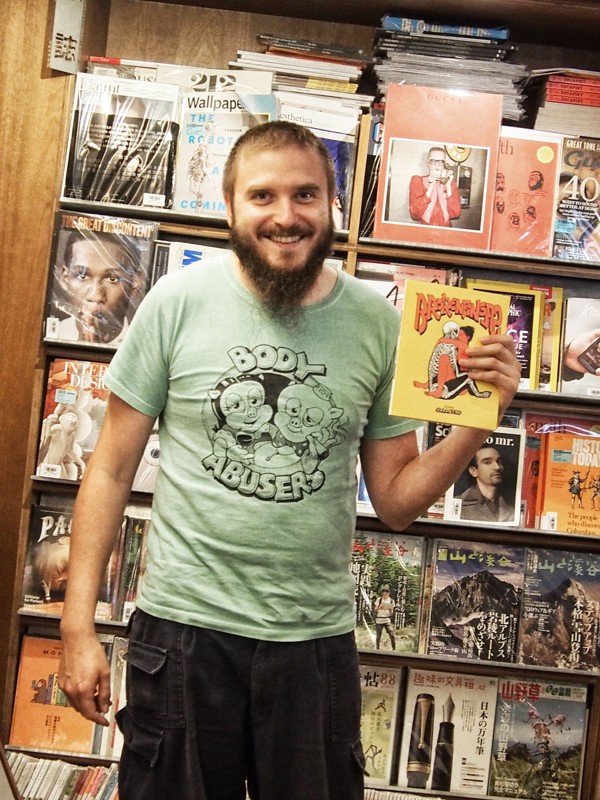 Zines are “appealing to a pretty wide audience, so you don’t necessarily need a degree in art to appreciate them”, says Tiny Splendor co-founder and former Hong Kong resident Max Stadnik, who was passing through the city recently. He sees the contemporary popularity of zines as relating to “a fetish for paper and printed ink” deriving from digital fatigue.

“It is affordable art, it isn’t a painting, where it is thousands of dollars,” explains another Tiny Splendor co-founder, Cynthia Navarro, during an interview in her Los Angeles studio. “Getting out of the recession, my generation is still struggling with getting proper jobs.”

As happened during former waves, Stadnik observes, it is typically under-represented groups making today’s zines, the tense political climate in the US adding fuel to the fire. He sees zines and social media as being a “fairly explosive combination, in a really good way”.

Zines are popular within marginalised groups and there have been a number of projects from, and about, the Chinatowns in Philadelphia, LA and Vancouver. Martin Wong’s Save Music in Chinatown, for instance, documents his attempts to support the defunded music programme at Castelar Elementary public school, in LA. 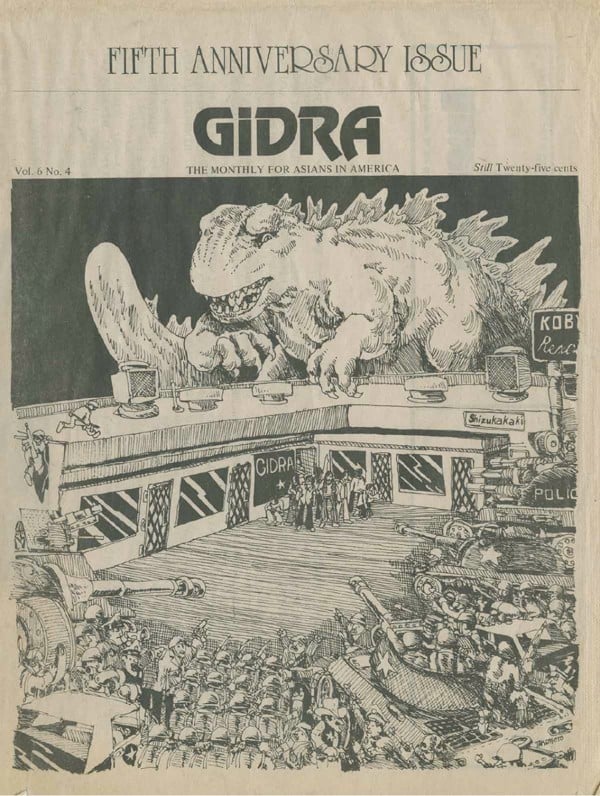 A former editor of ’90s publication Giant Robot, Wong describes his experience with the medium in a zine published by LA’s Chinese American Museum that accompanied the “Roots: Asian American Movements in Los Angeles 1968-80s” exhibition, which ended in August. In the introduction to that zine, exhibition curator Steve Wong states that use of the format is “in the spirit of past self-generated, community-based publications like Gidra [1969-74]”, which emerged from a group of student activists at the University of California, Los Angeles.

In Hong Kong, bookstores such as Kubrick, in Yau Ma Tei, ACO, in Wan Chai, and Book B, in Mong Kok, and events such as “Here is Zine”, held at PMQ, in Central, in December and January, are helping to spread the word. Beatrix Pang Sin-kwok, of Small Tune Press, has co-created a collective, Zine Coop, that hosts regular production workshops. 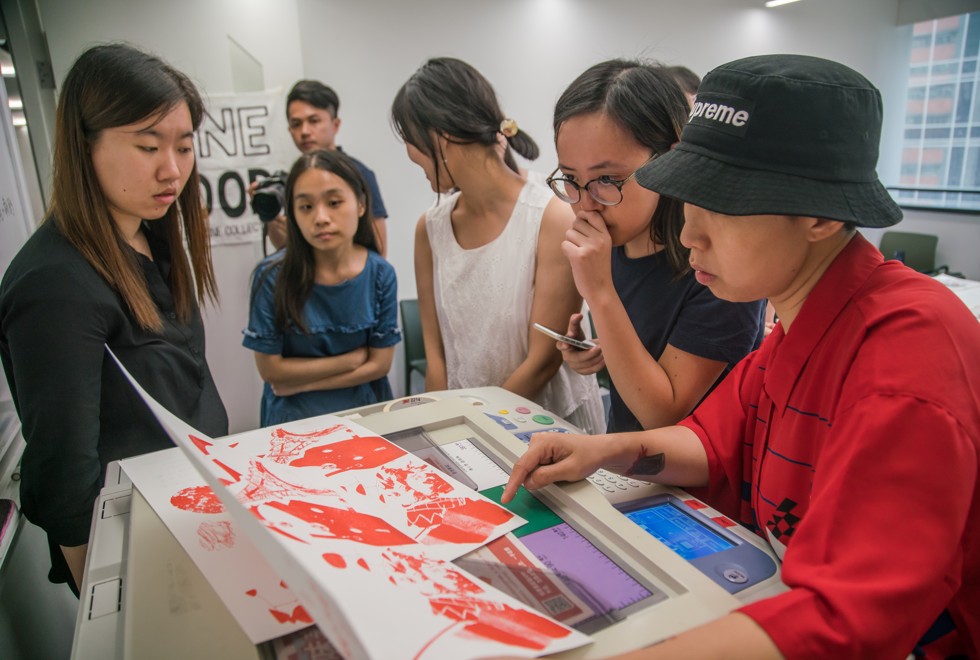 “There is no teacher, and we basically learn off each other,” says Pang, who appreciates the democratic nature of zines and aims to produce Hong Kong’s own art-book fair.

Zine Coop’s publications are eclectic and run the gamut from film fanzines to the comical work of “LazyJerk” – aka Ivan Yi Ho-yin – which satirises sex education in Hong Kong.

Collective member Leung Yiu-hong’s I Need to be Physically Healthy Because My Mind is Weak (2013; Small Tune Press) is hand-bound using beautifully textured paper. The photography within, taken during a time of mental duress, focuses on details most of us take for granted; the quality of light in the afternoon, the strangers we pass on the street. 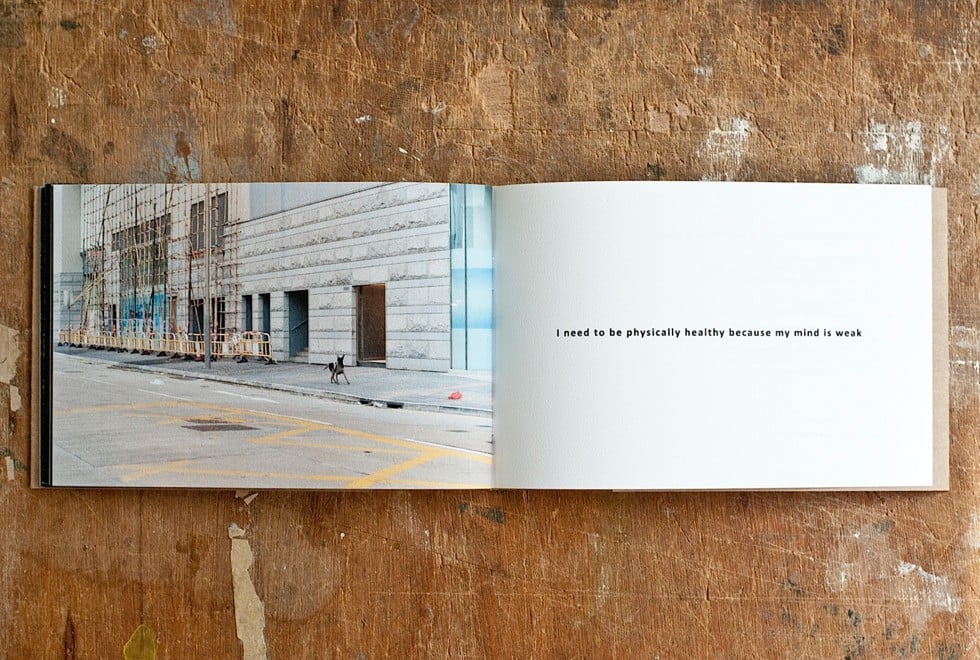 Leung Yiu-hong’s I Need to be Physically Healthy Because My Mind is Weak.

“If you are an artist, you are supposed to think you have an independent spirit, you publish it yourself – because in Hong Kong you can still do that,” says Leung, speaking in his shared studio, behind olive-green slatted shutters at the Kai Tak campus of Baptist University’s Academy of Visual Arts, where he is a part-time lecturer. “You create opportunities for yourself.”

Although Hongkongers “don’t treasure books” on the whole, the process of making I Need to be Physically Healthy led Leung to fully appreciate the printed medium, he says, and start his own series, Mumble Zine. 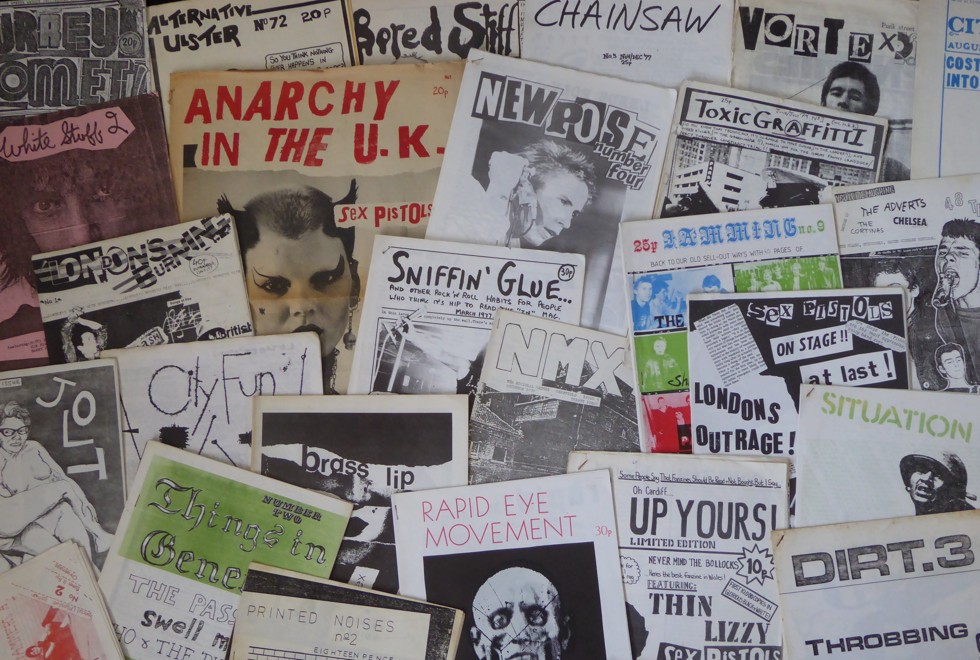 British punk fanzines from the 1970s.

Hong Kong has a rich printing history, lithograph and letterpress techniques having been in use in the city for more than 100 years.

“When the Communists took over [China], a lot of Shanghai printers fled to Hong Kong,” says Maurice Kwan Wai-leung, chief executive of Regal Printing, one of the few domestic print companies still in operation. “In the 1950s, because of the influx of money and technical know-how from these Shanghai printers, the printing industry in Hong Kong all of a sudden started to bloom.

“Then, in the 1960s, the Japanese came here with new tech­nology – mainly Toppan Printing and Dai Nippon Printing. They pushed the printing industry to new heights in the 1970s.”

This legacy is still apparent in some of Hong Kong’s industrial neighbourhoods. While companies such as Regal serve international publishing houses and museums, Hongkongers can utilise this underused infrastructure to create printed matter at low cost, with fast turnaround times.

One of the major instigators of the current art zine trend is Print Studio Ink’chacha. The walls of its Kwun Tong office are plastered with candy-coloured page samples, and littering the room are fluorescent ink drums for use with the studio’s Risograph machine. The Japanese photocopier/printer is used by hospitals and schools to produce monochrome leaflets but Ink’chacha believes it is the first to use the “Riso” to provide a local service tailored for artists. 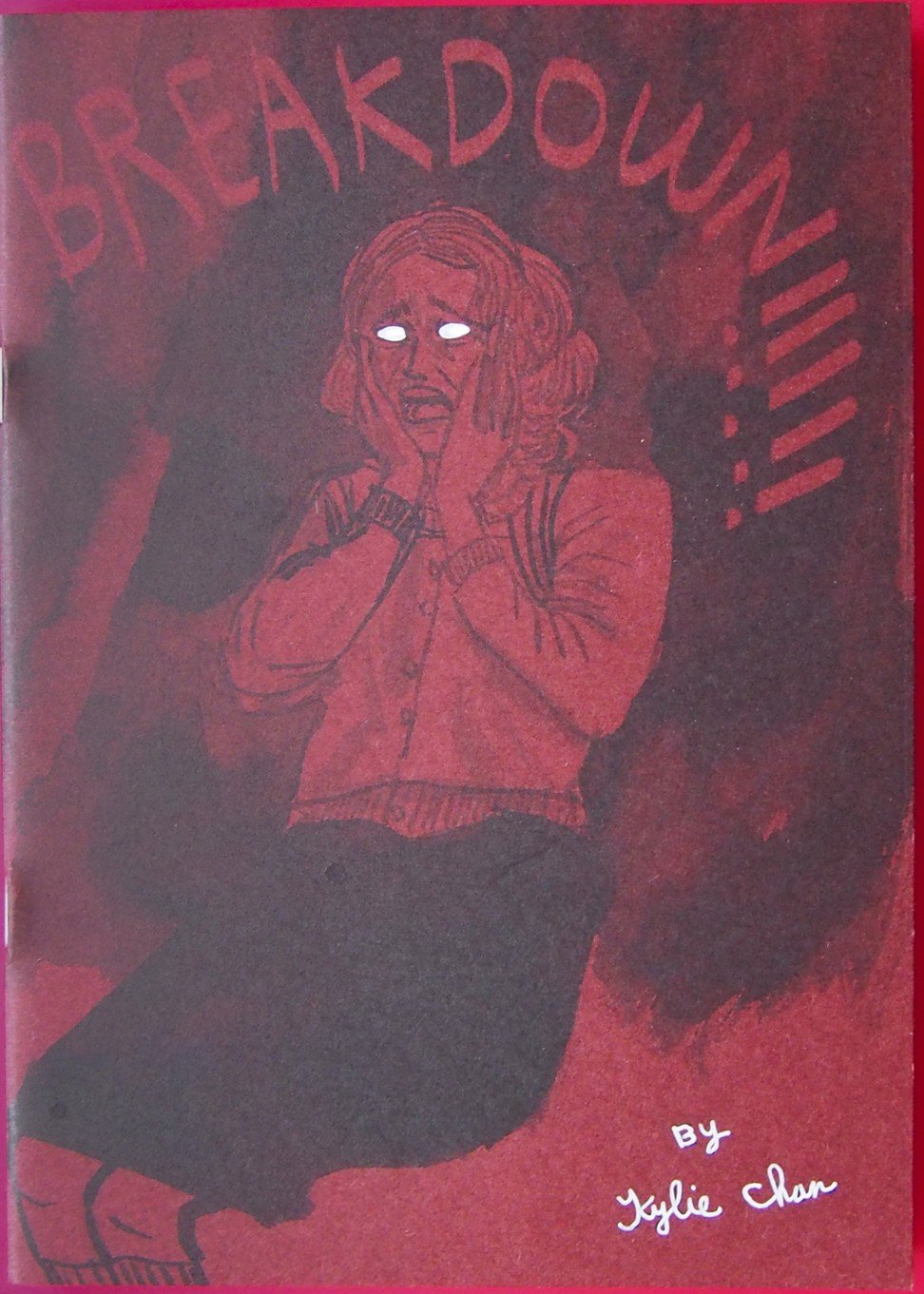 Breakdown, a zine by Kylie Chan.

The trend inspired a wave of illustrators, many of whom exhibit and sell their zines at Odd One Out, a gallery in Wan Chai that focuses on printmaking and artist representation.

“Zines are a Western mindset, brought in by people who have been studying overseas,” says Odd One Out owner Phemie Chong Pik-kwan. “They see things differently.”

Chong began selling zines – specifically those of artist Kylie Chan Kai – in 2012. Her print runs range from 10 to 250 copies.

“[The zine] is an intimate vehicle for me to communicate through,” says Odd One Out artist Yiyu Lam. “I am interested in visual narrative work. I get the narrative to work through the ‘pagination’ of the book, and the body movement of the characters.” Pagination controls the story sequence by creating cliff­hangers and surprises as you flip the pages, he explains.

“I love to explore [Cantonese cultural] themes, not only to share with the Western world, but also to remind people in Hong Kong how important these cultures are to us,” says illustrator Charlene Man Sin-hang, creator of one of Odd One Out’s bestselling zines, Villain Hitting, a pastel-coloured look at the folk practice whereby enemies are cursed with the invocation of magic. An artwork in Villain Hitting, a zine by Charlene Man.

HK Farm co-founder Michael Leung Tze-kwong says his interest in farming stems from traceability and food-safety issues, which “in this part of the world are much more frequent – and extreme”.

“We met a lot of independent units doing art and farming in Hong Kong,” says programme coordinator Mandy Chan Hei-man, of the year-long project’s genesis. “I remember Michael saying that they see building a rooftop farm as an installation, and that is why we use it as a platform to communicate with people.

“At the end of the one-year residency with HK Farm, we planned an exhibition, but we thought, maybe instead, we would publish a collection of zines.” 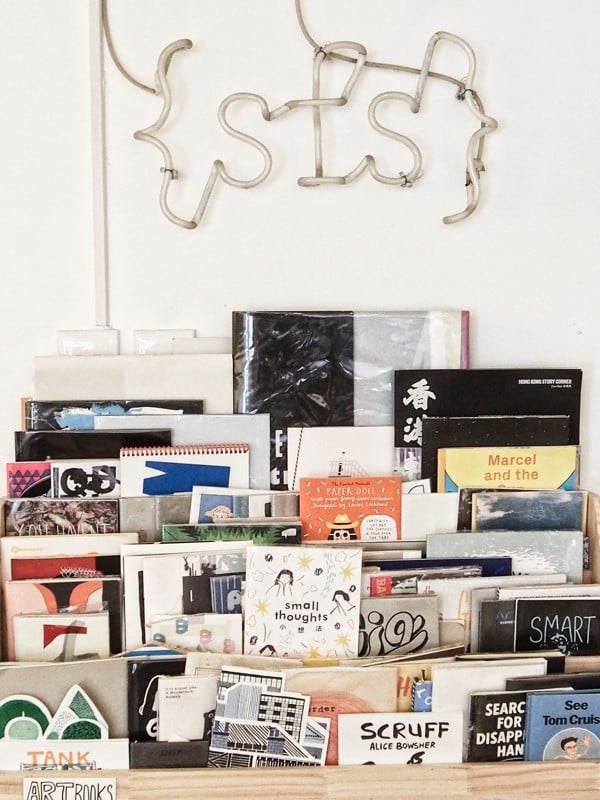 Odd One Out, a gallery in Wan Chai that publishes zines. Picture: Manami Okazaki

An edition in the 10-strong series documents a “guerilla farm” that sprang up outside the Legislative Council building during the 2014 Occupy Central protests, underscoring the notion that agriculture is one of the issues marginalised by the government and society. Leung explains that the Occupy farm, being on the ground, fostered public interaction in a way urban rooftop gardens cannot.

Sets of all 10 zines were placed in 100 planter boxes and – as well as appearing at art exhibitions such as the Triennale di Milano 2016, in Italy, and the Echigo-Tsumari Art Triennale 2015, in Japan – were sent to carefully selected recipients, ranging from cultural institutes to well-known rooftop-farming companies, such as Brooklyn Grange, in New York, giving the project “mileage, not just in terms of distance”, says Leung, “but in the kind of institutions or spaces that printed matter can infiltrate”.

In the age of online activism, the use of printed matter might seem anachronistic but, as translator Léonard Lin Yiu-chow, who collaborated on The HK FARMers’ Almanac project, explains: “The hashtag way of information delivery is fast but tends to filter away in nanoseconds. The use of printed media is almost like injecting our soul into a physical form, to convey the message in a more compelling way, instead of just downloading information.” 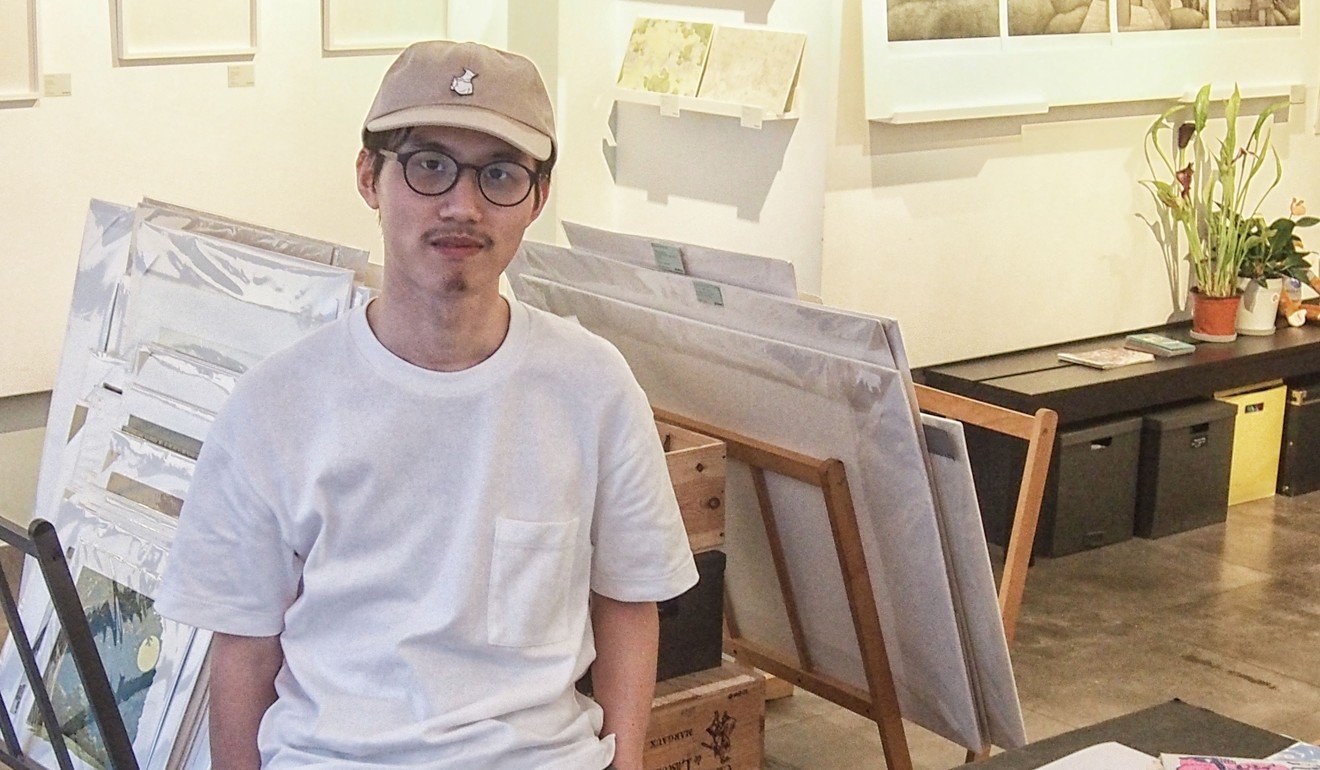 Artist Yiyu Lam with a selection of his zines at Odd One Out. Picture: Manami Okazaki

Among the other zines highlighting social issues Leung has worked on is Pang Jai, a 500-copy, 40-page booklet to support fabric-market sellers in Sham Shui Po who are under threat from urban renewal and development. Pang Jai envisions the fabric market existing in a new location.

“We distributed it to district councillors, the government, and we even took it into Legco as part of a meeting,” Leung says. “During that meeting, Fernando Cheung Chiu-hung, one of the Legco members, actually picked up the zine, and it was really symbolic.

“He held it in the air, waved it, and said, ‘These guys are doing the government’s job!’ If it were digital, he would have said, ‘Hey guys, go to http://www.dot …’ – and it wouldn’t really have worked.”

Kidney Chung Chun-yin, a member and curator of the Asia Subculture Association community group, says many of his projects show “another side of Hong Kong”, such as grievances over the “work slave” situation of long hours with little wages, the elderly in society and generational problems. 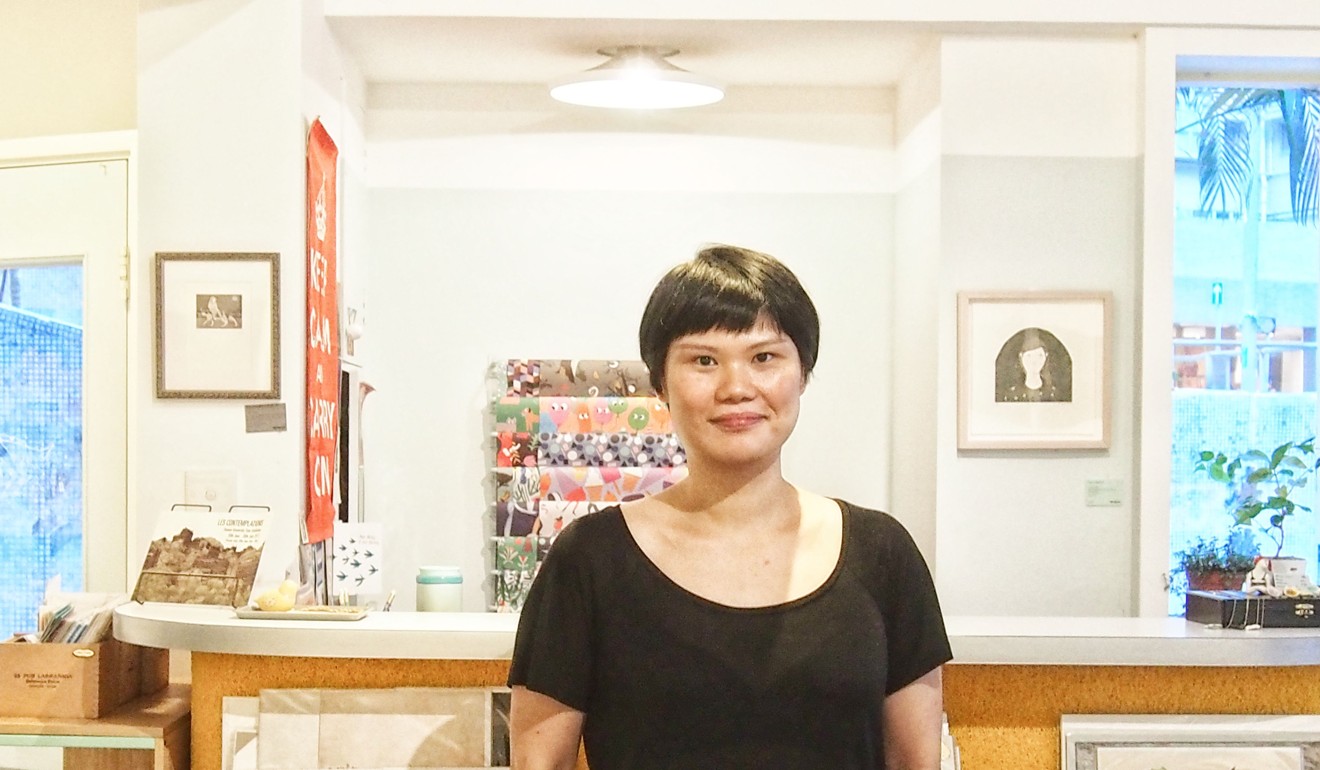 Phemie Chong, of Odd One Out. Picture: Manami Okazaki

Artist Takuro Cheung’s zine, System Failure, is a gritty manga (comic) that tackles youth suicide and its connection to the education system, reflecting on school experiences that left him feeling “helpless and devastated”.

Stadnik sees the recent interest in zines locally as a “great thing”, because when he was living in Hong Kong – the American was a Chinese fine arts student at Chinese University in 2008 – “it seemed like a lot of people really looked down on artists. It seemed like there was a stigma”.

Zines might be an accessible tool of expression and a creative outlet for artists, but they also extend, in their own small way, Hong Kong’s print legacy. Their renewed popularity shows that, for some, there is nothing as satisfying as flipping through paper pages.