In Sign of Resistance, Chinese Balk at Using Apps to Snitch on Neighbors

Mao Zedong once hailed Fengqiao in eastern China as a model for “mobilizing the masses” to galvanize Communist Party rule. Under President Xi Jinping, there is an app for that.

There’s just one problem: Many people are wary of using the new technology platform.

The “Safe Zhejiang” app enables users to notify authorities of problems ranging from leaky drains and domestic disputes to traffic violations and illegal publications, in text or photographic form, as long as the informants reveal their location and identity.

In exchange, they get perks including discounts at upmarket coffee shops and coupons for taxi-hailing and music-streaming services, as well as for the Alipay online-payment system, run by the financial affiliate of local tech giant Alibaba Group Holding Ltd.

Fengqiao, a township of some 80,000 people in Zhejiang, is being hailed nationwide as a showcase for the platform. Resistance so far has been stiff, principally from citizens who resent being forced to use a surveillance tool, or fear official retribution for voicing their concerns. For some, it smacks of the Mao era, when the party gathered detailed files on citizens and incentivized them to inform on each other.

There also has been pushback from some local officials eager to control the flow of information, lest it be used against them by rival bureaucrats and superiors.

“It’s a process,” says Zhou Yuchi, an official in charge of the project in Fengqiao. “We can get people to download it. Whether they are using it or not is another question.”

Chinese people generally appear less concerned about data privacy than most Westerners. The lukewarm reception to the apps, however, suggests there are limits to how far they will willingly submit to China’s expanding surveillance state, and that many aren’t prepared to volunteer information to the government.

That puts Beijing in a bind. It wants to preserve party rule with the help of technology that allows it to keep closer tabs on citizens, while also appearing responsive to their needs. If experiments such as the apps fail, the party might rely more on the kind of intrusive surveillance technology it has pioneered in its Muslim northwest, where residents run a gantlet of checkpoints, cameras and scanners checking ID cards, faces and eyeballs.

China already is building one of the world’s most sophisticated systems for monitoring its citizens covertly using facial-recognition cameras, customer data from big technology companies and a nascent “social credit” system that rates online and real world behavior.

The party leadership now wants citizens to volunteer information that would allow the state to monitor them even more closely, discourage them from protesting or petitioning, and create vast pools of data on public grievances and local officials’ performance.

Apps like Safe Zhejiang are being rolled out in many cities and provinces, with plans to integrate and cross-reference the information obtained with other data sets and video-surveillance footage, according to people involved in the apps. 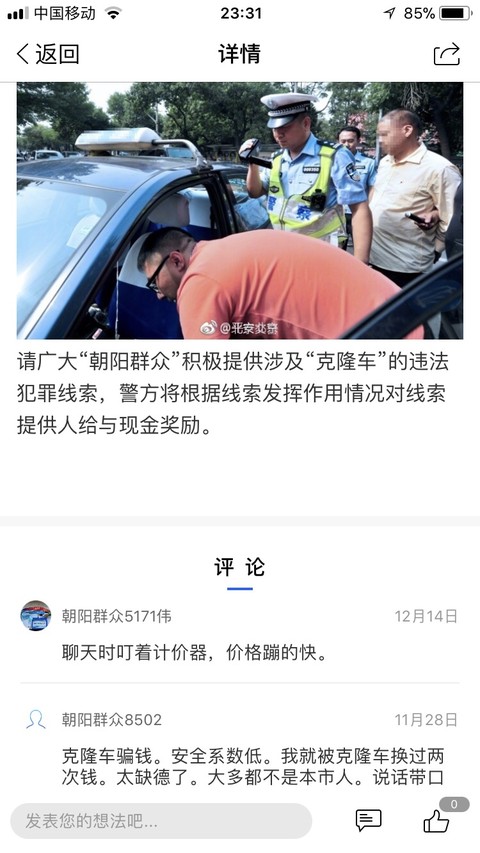 An app in Beijing’s Chaoyang District offers cash rewards for information given to police, seen here appealing for tip-offs about fake taxis.

Those too have struggled to attract users other than government officials, according to people involved in developing or managing the apps and dozens of residents of the places where they are operated.

“The problem is people aren’t participating in these things willingly, and they need to be for the party to achieve its objectives,” says Samantha Hoffman, a research consultant for the London-based International Institute for Strategic Studies who recently completed a Ph.D. thesis on social management in China.

The party has talked of developing an automated social-management system since the 1980s, when it began computerizing official data and seeking new ways to control society after economic reforms brought Mao’s totalitarian governance model to an end.

Since the early 2000s, the party has steadily expanded a “grid management” system that divides communities into units of around 300 households—each overseen by a “grid manager” who visits each one regularly—and gathers a broad range of data on residents’ lives.

Under President Xi, the emergence of powerful new technologies has accelerated efforts to digitize social management and bolstered his drive to enforce the party’s primacy in all areas of Chinese society.

Zhejiang, home to many of China’s leading technology companies, including Alibaba, is one of the provinces leading the charge. Safe Zhejiang was designed by a local company, Hangzhou Tianque Technology Co. Ltd., which describes its main business as providing “social governance” software to Chinese authorities. The company’s chief executive, Tang Zhenghong, declined to comment.

Zhejiang has a strong political connection with Mr. Xi, who served as its party chief in the 2000s. Zhejiang authorities named their app after a campaign Mr. Xi launched around 2004 to get local officials to visit residents more regularly and listen to their problems.

Complaints submitted to the app are visible to all users registered in that area, and informants are rewarded with points: 20 for downloading it, 10 for inviting others, five for signing in every day of the week and two for each problem reported.

The points can be exchanged for “gold coins” that can buy mobile-phone data, discounts at stores including Whitbread PLC’s Costa Coffee chain and coupons for brands including the taxi-hailing app Didi Dache and Tencent Holdings Ltd’s QQ music-streaming service.

Also on offer are internet cameras from Yingshi, a brand owned by Hangzhou Hikvision Digital Technology , whose surveillance cameras are used by Chinese police. 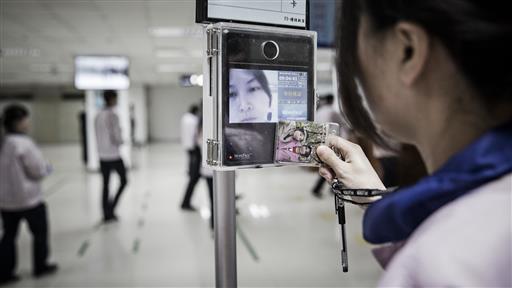 Once the stuff of science fiction, facial-scanning cameras are becoming a part of daily life in China, where they’re used for marketing, surveillance and social control. Video: Paolo Bosonin. Photo: Qilai Shen/Bloomberg

Orders are then dispatched not just to local officials but to grid managers and “volunteers” from social organizations, who can post notices on the app—again visible to all users in the area—reporting that problems have been resolved.

Officially, this is voluntary. After Zhejiang authorities made its use a measure of government performance, some local officials tried to make it obligatory for officials, grid managers and some regular citizens, according to official notices and app reviews. 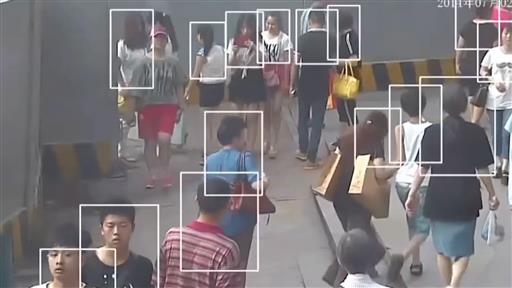 China has turned the northwestern region of Xinjiang into a vast experiment in domestic surveillance. WSJ investigated what life is like in a place where one’s every move can be monitored with cutting-edge technology. Video: Clément Bürge/WSJ; Image: DeepGlint

One notice on Zhejiang’s Tongxiang city government website said users should report on marital and other disputes, and on people who could “affect social stability,” including members of the banned Falun Gong spiritual movement, elderly petitioners, drug addicts and the mentally ill.

The public pushback began soon after the app’s launch in August 2016.

Feedback on app review sites has been overwhelmingly negative, with many people complaining that kindergartens and schools were obliging parents to download it, while others said they had been ordered to do so by local employers.

“Junk software—teachers and students are actually being forced by the government to download and register!” complained one reviewer on Sept. 28 last year.

“If you reveal the informant’s personal information, who will dare to report anything?” wrote another on June 6 this year.

The app has had an average score of 1.8 out of five stars since its launch, according to App Annie, a California-based company that provides app market analysis.

Another common complaint is that authorities only allow users to report minor issues, such as trash being dumped in unauthorized places, while censoring reports about more serious problems.

“What use is this platform? Officials oppress ordinary people, take bribes and bend the law,” read one posting from an app user in a village around Hangzhou, Zhejiang’s capital, on Nov. 29. He went on to identify by name a village leader he accused of corruption.

The response via the app was: “Hello. Because of an adjustment to the system, this platform is no longer able to report information. If you have any clues about this functionary’s illicit behavior, you can report it to the township discipline inspection commission.”

A resident of Huzhou, another city in Zhejiang, says neighborhood officials reprimanded him after he made a recent post on the app suggesting they hadn’t accomplished a task they claimed. “I said something, and they told me I was looking for trouble,” the resident recalls.

Zhejiang’s political and legal affairs commission, which oversees the app, said in a faxed statement that soon after its launch, some local officials had “mobilized” teachers and parents at schools to download the app, but as soon as the committee found out, it stopped the practice and only encouraged voluntary downloads.

It said the app now had five million users—roughly one in 11 of Zhejiang’s 55.9 million residents—and had helped them in a variety of ways, including reuniting divided families and allowing police to bust a gang involved in a pyramid scheme.

“Problems that you previously had to go to different departments or dial different hot lines to report are now solved on a single app,” the statement said.

Fengqiao has been held up as a success story, with local authorities saying the app has helped reduce the number of criminal cases, public disputes and petitions by residents to higher levels of government.

Over two recent visits to Fengqiao, Wall Street Journal reporters couldn’t independently find a single person using it. Many said they hadn’t heard of it.

Local authorities arranged further interviews and produced two residents of villages around Fengqiao who they said were active users. Examination of their mobile phones revealed they had submitted three pieces of information between them.

Chen Shuiyin, a 46-year-old homemaker, submitted one item: A photograph of a senior government official visiting her village.

“To tell the truth, I don’t use the app much,” she said. “I generally contact my grid manager by phone. I feel the app isn’t necessary.”

Lu Xiaoxiang, a 46-year-old hardware salesman from Yongning village, had reported two problems: the removal of a pedestrian crossing, which had since been replaced, and silting in a local reservoir, which had yet to be addressed.

He too said he generally reported issues by phone and that none of his family or neighbors used the app.

Part of the problem, according to experts on Chinese governance and big data, is that local officials are wary of allowing high-level authorities access to such information.

Wang Haijun, the party secretary of Duhuang New Village on Fengqiao’s outskirts, said he told villagers to report problems to him by telephone, text message or WeChat, a popular Chinese messaging service—not on the app—so he could decide what to report up the chain.

“At the end of the year, they assess how many problems could not be resolved in the village,” said Mr. Wang, who is 48 and has been village chief for nine years. “If we report problems almost every day, we won’t reach the required standard.”

He said he preferred to report problems via another app available only to officials, rather than allowing the general public to view them.

Privately, some Fengqiao residents said they suspected the system was designed to allow local officials to quash residents’ complaints. They have historical reasons to be wary.

Mao praised Fengqiao in 1963 after local officials reported that people there had mobilized to root out landlords, counterrevolutionaries and other “reactionary elements.” That became known as the “Fengqiao Experience.”

After Mao’s death, state media revealed that Fengqiao residents had denounced one in 50 of each other. The “Fengqiao Experience” was largely forgotten—until Mr. Xi name-checked it in a speech in 2013.

In December last year, a national conference on digital innovation in social management was held in Beijing’s Great Hall of the People. Guests included senior police officers, officials from Zhuji city, which oversees Fengqiao, and executives from technology companies, including Alibaba.

The title of the conference: “The New Fengqiao Experience.”