BEIJING — Deng Yufeng wanted to create art that prods people to question their lack of data privacy. What better way, he reasoned, than to buy the personal information of more than 300,000 Chinese people off the internet and display it in a public exhibition?

The police did not appreciate the irony.

Last week, the authorities in the Chinese city of Wuhan shut down Mr. Deng’s exhibition in a local museum after two days and told him that he was being investigated on suspicion of amassing the information through illegal means.

Mr. Deng’s project coincides with a growing debate about the lack of data privacy in China, where people are starting to push back against tech companies and their use of information. Online brokers regularly, and illegally, buy and sell personal information online. Chinese people are often bombarded with calls and text messages offering bank loans or home purchases that seem too personalized to be random.

Mr. Deng, a 32-year-old artist based in Beijing, said he hoped to get Chinese people to question that everyday scenario.

“When these nuisance text messages become a daily routine, we develop a habit of ignoring and avoiding these text messages in a numb state,” he said in a telephone interview. “This is actually the mental state of most people here: a state of helplessness.”

Last month, Robin Li, the chief executive of the search giant Baidu, set off a firestorm when he said that Chinese people were willing to trade privacy for convenience, safety and efficiency. In December, the software developer Qihoo 360 angered many internet users when a blogger discovered that the company was taking surveillance footage from restaurants and gyms in Beijing and broadcasting it without permission onto its platform.

The rising public anger is taking place amid a similar debate in the United States, over Facebook. But Beijing officials keep the volume lower because personal data is broadly available to another powerful constituency: the Chinese government. Tech companies cooperate with the police in handing over information, with few questions asked. Citizens are resigned to the fact that they are tracked by the government, and there is little pushback about the increased state of surveillance.

So six months ago, Mr. Deng started buying people’s information, using the Chinese messaging app QQ to reach sellers. He said that the data was easy to find and that he paid a total of $800 for people’s names, genders, phone numbers, online shopping records, travel itineraries, license plate numbers — at a cost at just over a tenth of a penny per person. 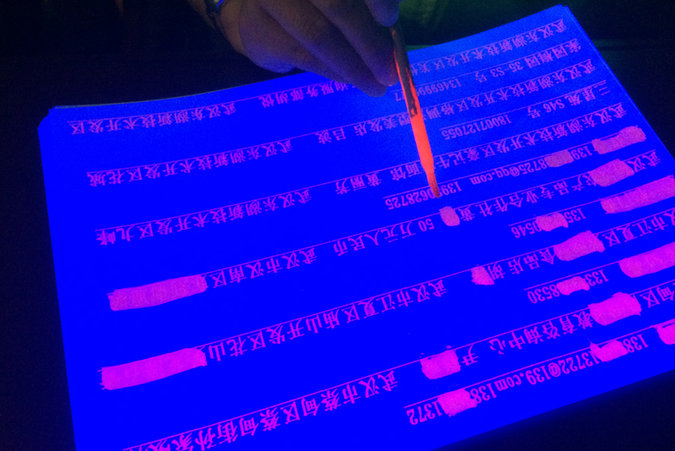 Mr. Deng’s project, in which partly redacted personal data was visible only under a special light source, highlights a growing debate about the lack of privacy protections in China.CreditDeng Yufeng

He said he knew he was breaking the law. He wanted to prove a point.

“Artists are not merely aesthetic creators,” Mr. Deng said. “In the very complicated state of our world today, we should also bear social responsibility.”

At his exhibition, called “346,000 Wuhan Citizens’ Secrets,” he printed the pieces of personal data on sheets of paper using a special liquid solution. The sheets were hung in neat rows and columns on a wall. Museumgoers could only see the data under a special light source, and key identifying details were redacted.

According to Mr. Deng, plainclothes police officers took him away on April 6, two days after his exhibition opened. They told him that he was being investigated for the buying of citizens’ information online and was barred from leaving Wuhan. When reached for comment, a Wuhan-based police officer from the station investigating the case said she did not know anything about it and hung up.

Under Chinese criminal law, Mr. Deng faces up to seven years in jail. But Raymond Wang, a lawyer who specializes in data security, said he believed it was unlikely that Mr. Deng would be sentenced because there were no “damaging consequences.”

Whether Mr. Deng’s exhibit will catch the attention of China’s leaders isn’t clear. But Legal Daily, an official, government-run publication, said Mr. Deng’s project showed how the existing laws on the protection of personal information were weak and enforcement was poor.

“The organizer’s purpose was to call for the protection of personal privacy, and he himself violated the law to purchase personal information,” the newspaper wrote in an opinion piece. “Due to the complexity of the plot, it will make for a lively legal lesson.”

The privacy project is just one of Mr. Deng’s many works of art touching on social issues. He has gone undercover to investigate the kidnappings of children, a major problem in China. He has also worked on a project on how people buy fake identification cards and guns.

Mr. Deng pointed out that the lack of data privacy was also a global problem.

With the help of volunteers, Mr. Deng sent about 10,000 text messages to the people whose information he used in the exhibition, inviting them to come.

One of them was not amused, according to Mr. Deng, responding back: “You’re sick.”