Many people outside China either still haven’t heard of WeChat or they think it’s the country’s equivalent of popular messaging service WhatsApp or social media giant Facebook. For many people in China, WeChat is much more – it is not an overstatement to say it’s an indispensable part of their everyday lives.

WeChat, or Weixin as it’s known in China, began life in a southern corner of the country at the Tencent Guangzhou Research and Project centre in October 2010. Since then, it has grown into the most popular mobile app in the country with over 1 billion monthly active users who chat, play games, shop, read news, pay for meals and post their thoughts and pictures. Today, you can even book a doctor’s appointment or arrange a time slot to file for a divorce at the civil affairs authority.

The seven-year-old app has also laid the foundations for stellar growth at Shenzhen-based Tencent Holdings, the tech giant behind WeChat, turning it into one of the most influential companies in China and grabbing the attention of global investors. Since the official launch of WeChat in January 2011, Tencent’s market capitalisation has risen over tenfold.

Yet, the company has hit a speed bump. Tencent has lost 29 per cent since a peak of HK$476.6 a share in January this year to trade at HK$336, erasing US$170 billion from its market value as of Wednesday’s close. Even before this sharp fall, some commentators had been asking whether Tencent has “lost its dream”, by focusing on growth through investment rather than the type of organic innovation that led to the creation of WeChat.

After the market close on Wednesday, Tencent reported a 2 per cent drop in second-quarter profit on lower gaming revenue and investment-related gains. Net income fell to 17.9 billion yuan (US$2.6 billion) in the quarter ended June 30, compared with the 19.3 billion yuan average of 12 analyst estimates compiled by Bloomberg. Sales were 73.7 billion yuan, missing analyst estimates. 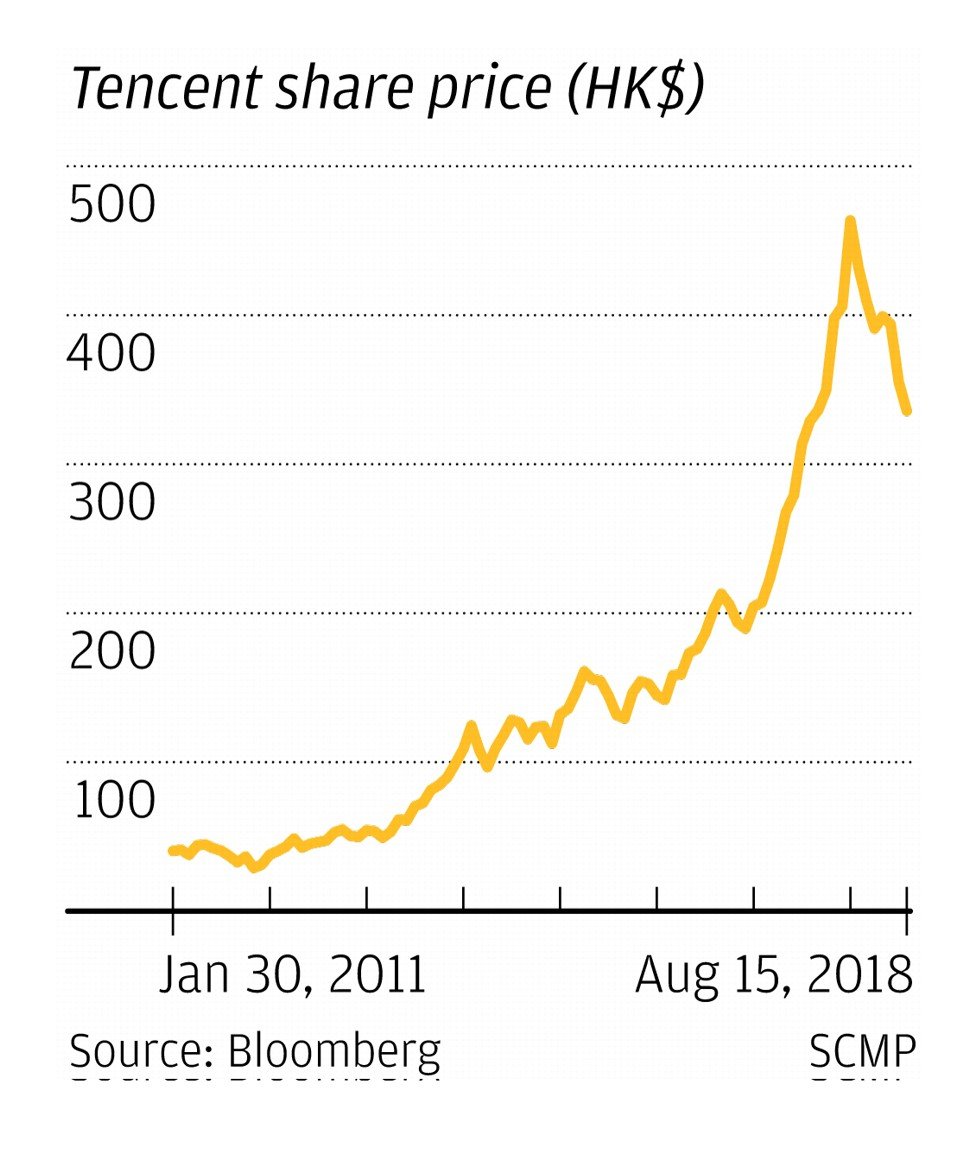 However, Tencent is still in the early stages of monetising its WeChat user base.

Cautious to avoid flooding user timelines with ads, WeChat currently allows a maximum of two ads a day to appear on its social platform Moments, which is “extremely conservative compared to our global peers” said Tencent’s Chief Strategy Officer James Gordon Mitchell in a May conference call with analysts.

“With improving targeting capability, opening up of inventory and roll-out of ad formats, we expect increasing dollar shift to social performance-based advertising, of which Tencent … should be the key beneficiary,” Jefferies analyst Karen Chan wrote in a research note in July.

Other analysts are also optimistic on WeChat’s prospects.

“[WeChat’s user numbers] haven’t hit the ceiling yet but I think they will at some point,” said Matthew Brennan, managing director of independent WeChat consultancy China Channel. “But they still have a lot of room to grow in advertising, and now with mini programs.”

Mini programs refer to applications typically smaller than 10 megabytes that can run instantly on the main app’s interface. They offer speed of access to users because a program does not have to be downloaded from an app store, they can run from within the app. This innovation allows platforms to host multiple services, turning them into super-apps, delivering greater convenience to consumers in the world’s largest smartphone market.

Mini programs are aimed at keeping users within the WeChat ecosystem, at a time when short video apps are on the rise. In June, the percentage of time spent on messaging apps among mobile users declined from 36 to 30.2 per cent compared to the same time last year, while time spent on short video apps rose from 2 to 8.8 per cent, according to figures provided by internet data services provider QuestMobile in July.

However, mini programs are just the latest in a long line of innovations at Tencent’s WeChat.

When Tencent’s flagship messaging service QQ was the dominant player in social media in China, Tencent founder, chairman and CEO Ma Huateng [know as Pony Ma] did not rest on his laurels. He spotted the inevitable shift in traffic from PCs to mobile internet in 2010, as smartphones led by Apple’s iPhone, gained in popularity. Ma knew that a mobile instant messenger would be the key to the future.

“WeChat is a strategically important platform for Tencent because it will help to sustain and evolve our social leadership from PC to newer mobile devices,” Martin Lau, president of Tencent, said in a conference call in 2011.

Tencent provided information about WeChat’s latest developments but did not make executives, including Allen Zhang, available for interviews for this article. The South China Morning Post reviewed conference call transcripts, filings, public speeches and local reports dating back to 2010 in researching the development of WeChat for this story.

The first version of WeChat only allowed users to send text messages and photos. The launch received little response from the market, at a time when instant messengers such as Feixin, an SMS app by China Mobile, and MiTalk Messenger by Xiaomi, were already on the scene.

“It cannot send a short message to someone’s phone number (like Feixin). It does not have the functionality of QQ. What’s the meaning of having this app,” one user wrote in the comments section on WeChat’s iOS app store page seven years ago, rating WeChat one star.

The inflection point for the WeChat team arrived in May 2011 when it was updated with voice messaging, enabling a user’s phone to work like a walkie-talkie. Daily user growth spurted from 10,000 to up to 60,000.

“The voice message [function] turned senior businesspeople who weren’t used to typing on smartphones into our WeChat users,” Ma recalled in a speech in Tsinghua in 2016. WeChat evolved quickly, including new functions such as ‘Shake’, which connected users who were randomly shaking their phone at the same time, and ‘Message in a Bottle’, which enabled messages to be sent to random users.

In July 2011, it added location-based service ‘People Nearby’ that allowed users to connect with strangers close to them. In Zhang’s words, this was a “game changer” and pushed daily user growth to 100,000.

“Shake and Message in a Bottle as well as People Nearby were born at the right time, offering access to different people,” said Lu Shushen, a former WeChat employee in an article on his WeChat account, referring to social networking among strangers.

WeChat users grew in tandem with smartphone growth in China. In 2010, when WeChat was still a research project, there were only 36.1 million smartphone unit sales in China. That number increased to 90.6 million in 2011 when WeChat was officially launched and had rocketed to 214.2 million by 2012.

But WeChat was growing even faster than this and was gradually leaving its competitors further behind. Feixin, for example, was reluctant to open up its messaging service to non-China Mobile users and MiTalk struggled to provide a stable user experience.

WhatsApp, WeChat’s biggest overseas rival today, was available to the Chinese market at that time [it was later banned by China in 2017 ahead of a major Communist Party congress] but missed its opportunity without any localisation or promotion in the market, China Channel’s Brennan recalls.

WeChat was also evolving into a hybrid social network, with the introduction of its sharing service Moments, the blog-like Official Accounts to help brands and content producers market themselves, and a games publishing platform.

WeChat added payments to the platform in 2013, and for a while this was limited to paying for games, virtual items and services such as mobile subscriptions. But when ‘Official Accounts’ were added to WeChat in 2013, Tencent’s management were hoping that this would transform WeChat into a full service platform.

Any WeChat user can set up an Official Account to broadcast messages and articles to their followers like a blog, but brands and service providers can also use these accounts to service customers. Today users can buy products, order meals or make a doctor’s appointment – among many other things through this channel.

However, while WeChat Pay got off to a relatively slow start, the game was about to change in a major way.

Before the Lunar New Year of 2014, Tencent co-founder Tony Zhang assigned a WeChat team member to improve the way Tencent traditionally handed out hongbao – red envelopes with money inside as a gift for Lunar New Year – to staff. As a result, the WeChat Red Packet was developed as a way to send “virtual” money to friends.

WeChat’s Red Packet became an overnight sensation during the 2014 holiday period with over 8 million Chinese receiving over 40 million hongbaos during the period, leading Alibaba’s founder Jack Ma to dub it the “attack on Pearl Harbour”. Users started to tie their bank accounts to their WeChat mobile wallet and it started to compete with Alipay – an already established mobile payments service from Alibaba Group Holding, parent of the South China Morning Post.

“We view mini programs as an enhancement of our Official Accounts system, designed to connect offline service providers with users online,” Tencent’s Lau said in 2017.

The concept of mini programs did not fully take off until January 2018 though when Tiao Yi Tiao, a jumping mini game, recorded 100 million daily active users after being launched in late December.

“We have had our ups and downs this year, but in general, I think we have met our initial expectations,” said Tony Zhang in a January interview in the People’s Daily, the ruling Communist Party’s mouthpiece.

By the second quarter of 2018, the number of WeChat mini programs reached one million and mini program users surpassed 600 million in June this year.

“The mini program initiative is opening many doors for Tencent,” said China Channel’s Brennan. “Monetisation due to adverts and payments … and by allowing [Tencent] to incubate and accelerate a variety of businesses within the ecosystem – e-commerce in particular.”